Cengage Makes a Deal to Crawl Out of Bankruptcy 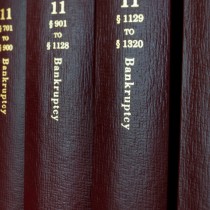 After filing for Chapter 11 bankruptcy in July 2013, Cengage Learning Inc. has announced the company has struck a new deal with its major creditors. The deal itself cuts down $4 billion in debt, but the agreement will also modify a previously filed plan of reorganization and lays the foundation for an end to the company’s Chapter 11. Prior to the deal, the textbook publisher had approximately $5.8 billion of outstanding debt.

The deal was reached through the mediation overseen by U.S. Bankruptcy Judge Robert Drain. Under the new agreement, Cengage will secure exit financing of up to $2 billion to fund its plan of reorganization and to provide a revolving credit facility. And as of last month, the company’s loans rose in value in anticipation of the modified plan. When the company exits bankruptcy, first-lien lenders will receive the majority of the equity while second-lien lenders and unsecured creditors will get a share of $225 million in cash or stock.

The agreement is still subject to approval by the U.S. Bankruptcy Court in Brooklyn, New York, but it’s a giant leap forward for getting Cengage back on the right track