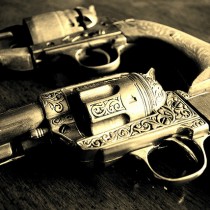 Colt Defense LLC, the 179 year-old manufacturer of such iconic firearms as the M16 rifle, M4 Carbine and Colt 45 revolver, announced it has filed for Chapter 11 bankruptcy reorganization. The West Hartford, Connecticut-based Colt was fighting a losing financial battle over the past few years, most recently proposing in April 2015, a pre-packaged bankruptcy to its senior bondholders that was soundly rejected. This failed turnaround is Colt’s second bout with bankruptcy, having previously emerged from its protection in 1994.

It appears that the Q rating for the maker of the gun that “Won the West” may have outstripped its ability to sell firearms. Colt wasn’t even in the top 10 rankings of gun manufacturers and in 2013 lost its government contract to produce the M16 and M4.   Once those contracts disappeared, Colt was forced to focus on the commercial market where it underperformed. As gun sales boomed in the U.S. since 2012 with Americans fearing firearm restrictions from the Obama administration, Colt bucked that trend and fell further behind.

In its first day filings with the U.S. Bankruptcy Court in the District of Delaware, Colt stated that recent liquidity issues significantly damaged its supply chain and that the U.S. Government was questioning its ability to meet commitments to deliver machine guns and replacement parts.   40% of Colt’s revenues were attributable to the United States and foreign governments

Colt said that it intends to continue to operate normally with the help of a $20 million debtor-in-possession facility from existing lenders.  The Company will pursue a sale of substantially all of its assets under section 363 of the Bankruptcy Code. Sciens Capital Management LLC, the current equity sponsor, agreed to act as the stalking horse bidder.