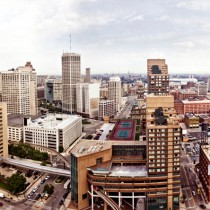 There have been new developments involving Detroit’s economic woes. Just recently, the city filed a lawsuit in U.S. bankruptcy court on January 31 that seeks to invalidate $1.44 billion of debt sold to fund public worker pensions.

Detroit contends the pension debt was nothing more than a borrowing by the city and it violated the borrowing limits imposed by the state of Michigan. The city is asking bankruptcy judge Steve Rhodes to declare the city is not obligated to continue making payments on the pension certificates of participation (COPs), which were issued during the term of Kwame Kilpatrick. The former Mayor is currently in prison on federal corruption charges.

Bruce Babiarz, spokesman for Detroit’s Police and Fire Retirement System, says the pension funds support the city’s lawsuit. “Let’s be clear, this lawsuit is not against the retirement systems or pension funds, but service companies and trusts that were created by the city to complete the COPs transactions,” he stated.

If successful, Detroit’s lawsuit could also void the unfortunate interest-rate swap contracts that played a role in its bankruptcy. The swaps were intended to help the city avoid interest-rate risk arising on variable-rate COPs. However, Detroit claims any contract arising from the COPs would be invalid from the start since “all other obligations incurred by the city in connection with the COPs transactions are unenforceable and void.”

It’s no secret that bankruptcy can prove to be a very long, drawn out process (especially when it involves an entire city). While a victory would certainly work in Detroit’s favor, it’s safe to say we’ll see many more developments such as this before it’s all said and done.

For more information about this recent development, visit www.reuters.com.